He had a thorough exam, and, his lungs sounded good and, we did a repeat on his bloodwork. The results came back on Saturday the 15th and, he is high normal on the WBC and, so, per the Vet, they would like to see him continue the Antirobe plus Doxy for another 14 days. Just to be safe.

His Vet on Friday felt he was healthy enough to be given his first DAPP booster. We will repeat this booster and then, give him his rabies later on.

Once, he is older, he shall then be neutered. From there, after he heals, he can make a very special announcement! 🙂

I asked one of the lovelies that I work with at KAH to do his nails as, I like to get these dogs into the hands of others as much as possible to help make them as well rounded plus balanced as possible AND, to keep giving them good experiences, in the hands of others. He was a bit wiggly yet, rocked it! 🙂 He is such an easy keeper……I can do his nails all by myself at home.

By the time, I left work on Friday, he was visibly more relaxed, asking people for love and, received many compliments on how gorgeous his coat is plus how far he has already come with his nervousness. He had no qualms about sticking his head into the treat/food bags that one of the Vets has under their desk for a snack or two!

On the way into KAH, he had his first ever vomit in my car. Has never done that before and, he has not had a vomit since then and even, went to Brockville, on Saturday with Sean to meet-up with a BHRR approved Volunteer for a visit and to pick up some goodies for the BHRR animals! They have not seen him since December 14th, and, so this was a lovely treat for both of them! 🙂

Below is a photo(not the best) of him at KAH on Friday. 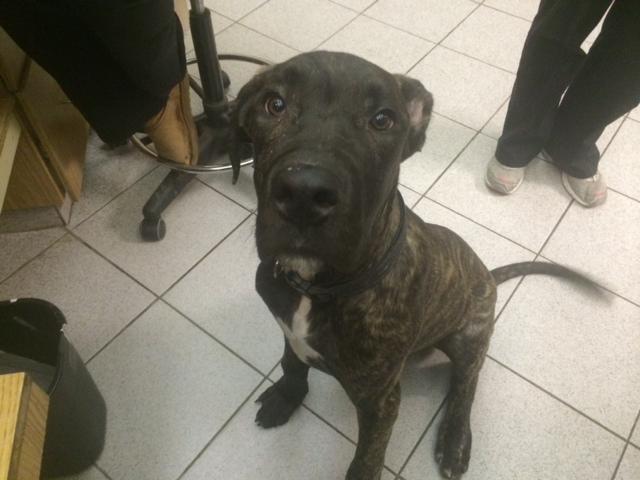