On March 30th, I was contacted about 2 Great Danes that were surrendered to a pound in the SWO area. I was informed that this lovely rescue soul that works closely with the pound was heading out later that date to assess them and wanted to give me a heads up.

I was then contacted later that day by another person to see if I could assist them.

I waited for the write-ups(photos were optional for me…as colour or sex does not matter) and determined that the one – female, fawn, cropped with docked tail would have no trouble finding a Rescue and she did. She went to another Rescue and the update that I had received was that she was placed into a permanent home within 24 hours.

However, the other one, I knew would have trouble and I wanted to help him 'Maverick'. He was not only that 'common' black colour, he was more reserved and lacking in confidence and we were told he had one deformed front leg. Info. blurb is below:

"Great Dane, NEUTERED male, 1 year (birth date Feb 14/12), black, "Maverick".  Came in with dog #4.  Poor Maverick has front leg deformity which causes him to have very bowed legs.  He is able to walk and get around without pain though and does quite well for himself.  We have been told that he had surgery at OVC for his legs but are awaiting proof of that.  The owner stated it was because he grew too fast during puppyhood.  Maverick is the more reserved one, gaining his confidence from Vida. BUt although slightly shy Maverick was still very affectionate and had no issues with handling.  He weighs approx 85lbs. His vaccines are up to date until June and he is neutered.  He has natural ears and a full tail.  Both these Danes are good natured and loving. These dogs are the product of divorce and neither person can take the dogs.  The female owner cared enough about her dogs to make sure that she turned them in to a pound that deals with rescues "

We committed to taking him in and transport was arranged for April 6th, 2013. 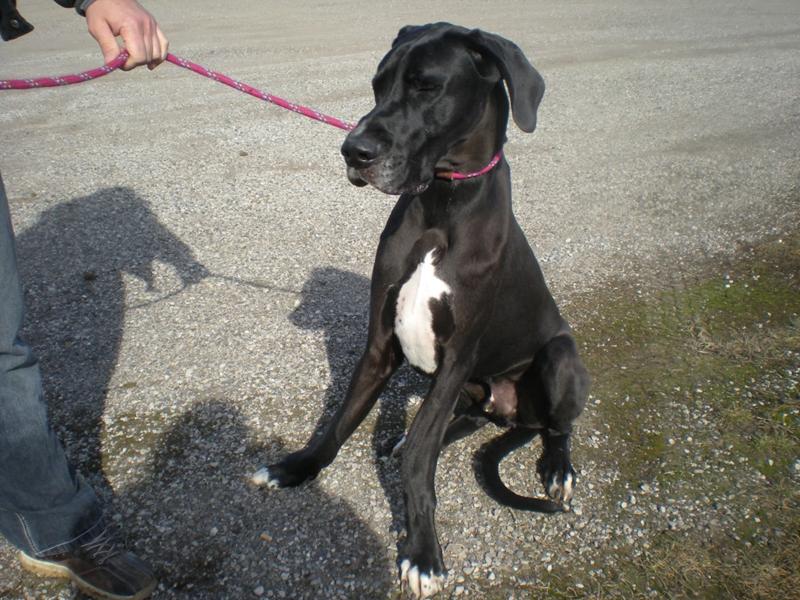