On Friday September 7th, 2012; BHRR's Ani was scheduled to go to her temp foster family that night.

That same morning, I received an email from a previous approved BHRR approved adoptive home and they wanted to be seriously considered to adopt BHRR's Ani.

I put a 'hold' on BHRR's Ani to be temp fostered, advised the temp foster home of the situation and explained that we did not want to see a 'quick' bounce from us to them to an adoptive home. That would not be in her interest. I advised that I would keep them updated.

The previous approved adoptive home had their application submitted ASAP(did not take a non-refundable application fee as almost all the background was the same – only change was that one of our dogs was not in their home!) and we were able to schedule the home visit on Saturday September 8th, 2012

They were looking for a shorter GD due to their house and also to compliment the other GD they had adopted from us, yet; I wanted to bring two Great Danes that could be a lovely fit and so also brought BHRR's Jetta.

Just as when I did the home visit back in June for them with BHRR's Cobalt and BHRR's Shiva; either dog could have been a good fit. Their hearts were set on BHRR's Ani and they are aware of the work needed as effective human leaders to have absolute success in their home now that they have two dogs. YAY! 🙂

Below is a photo of the happy family! The home that adopted BHRR's Ani had also adopted BHRR's Shiva back on June 21st, 2012. I knew that they were thinking about a second dog at some point, not necessarily another Great Dane and imagine my absolute thrilling surprise to have received their email!

I updated the home that was going to temp foster her and offered up BHRR's Jetta who they had also really liked at their own hv or another possible great matched fit; yet; there is no rush for our dogs to go to temp foster homes at this time.

BHRR's Jetta – YOUR right home is out there! 🙂 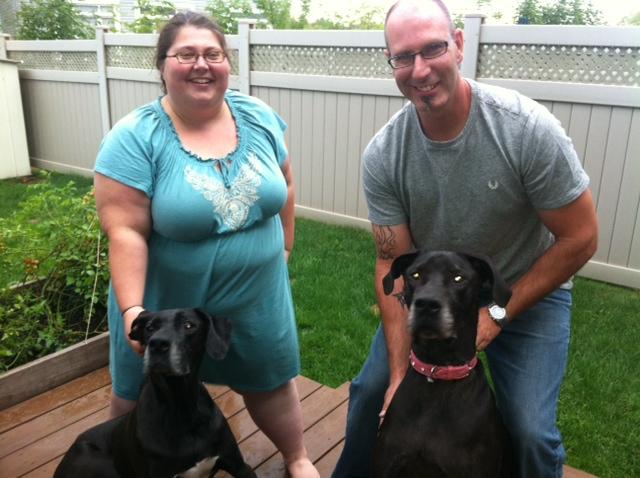