His Story –
Rambo is a 12 month old, neutered male. He was originally surrendered to the shelter on December 9th, 2011 because he got too big and they could not afford to keep him. He showed in the shelter as a typical active young Doberman. Jumpy, rough, will tug his leash if he is bored and mouths.
He was adopted twice by the shelter and twice came back. Once was for counter surfing(O. went to correct him with hand raised over his head) and the second time(February 1st) was for his mouthing(went to grab collar as it was being put on and ended up mouthing the O.'s thumb). 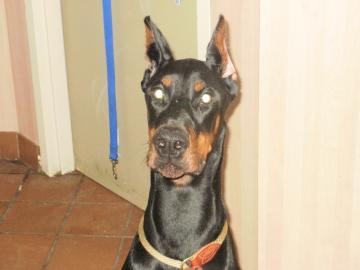 NOT YET AVAILABLE FOR ADOPTION