TIME to update all of BHRR's Atlas's fans on his progress! 🙂

It is so hard to believe that he has been at BHRR since November 13!!! It feels like he has always been with us; he is just that type of boy. 🙂

Those first three days in particular; after he arrrive to BHRR; I really did not know if he was going to make it…. 🙁 I really did not and I was in complete fear and worry over him. 🙁 He really was not 'there'. 🙁

He has come so far in the time that he has been here. I am posting two photos below from November from when he enountered the same basketball(a dog had moved it back into the almost 2.5 acre fenced in yard) and how he was actually showing some interest in it; instead of being terrifed like he once was PLUS his tail!! It was up a bit more!!!

He was showing some life!!

In bringing him back to the land of the living, I have to give most of the credit to BHRR's Veteran. These two dogs have a past and a history together and there is no major love lost between them. WHICH is very interesting to note as they all interact with the other dogs without these same feelings they have towards each other.

For those that attended our November BHRR "EXPERIENCE' Mini Open House; they were witnessed two not one but two times that BHRR's Veteran went right up to BHRR's Attas's crate and 'teased' him and got a reaction from him. IT was BHRR's Veteran that brought that spark into BHRR's Atlas's eyes FAR more than anything we believe that we have done. He drew him out of his shell, he teased and bugged him and got a 'rise' out of BHRR's Atlas.

While these two may never be the best buds in the world; they have an understanding of each other. A grudging respect and a 'history' that has made them competitors in their attempts to survive in the conditions they were living and each one wants to try and show up the other one in bluff and guff and snort! However; much that they may act indifferent towards each other; they are always / actually constantly aware of each other and if one is 'down' or not up to snuff; the other will deliberately poke and bug them to get the other moving and to snap out of things. IT has been so fascinating to watch.

So, while they may not love each other; they are dependent on each other and watch out for each other. They do not like it if they feel that another dog may be playing too rough with the other and they remind me a bit of an old married couple at times! LOL They are really in tune with each other, they have shared something very life threatening in abuse, neglect plus cruelty together and their bond runs deep right beside their animal instinct to survive.

Unfortunately, somewhere along their life path; both were at the point where neither would have survived much longer; yet; while BHRR's Veteran still had spirit/life inside of him along with hope; BHRR's Atlas did not. It had been taken away from him and he would have perished very soon.

Even now and it shall be a long time before anything really changes; if he sees an object in your hand; be it a spray bottle or even a bowl of water or food; he can still 'hit the deck' and cower and will turn his head and blink fast or even close his eyes. We have also witnessed him rolling slightly in a very submissive manner and you just want to drop everything and hug him close; yet we know that this is not what he needs.

He needs us to keep to the routine and consistency with continued patience so that he sees that these bowls come out on a regular basis and they carry good yummy things and water and plenty of it and that our hands are meant for loving touches, not hurting mean hits or punches. He needs us to calmly reassure and then passively ignore and for us not to unconciously enable any SA behavours BUT let me be honest; that in almost 25 years of these rescue trenches; I sure do want to fight all the experience, training, degrees and knowledge of proven results and chuck it out the window and do that major scoop up of him in my arms and bury my face in his neck and weep and never let him go from tons of kisses and bear hugs. 🙁

In the end, all comes back to as it should be within myself of the 'war' of what needs to happen and my heart/soul of 'what' I want to also do for him and we just keep moving forward with the baby steps.

Even today, while, he will take some treats out of my hand; he has no clue what to do with them more often than not. He also will lick at a smoked dino bone or knuckle bone a bit; but has yet; to figure out what to really do with it. 🙁

He will now zoom and bounce for me outside or for Sean yet; he still does not understand toys.

He still also walks around with a somewhat defensive manner with some dogs; BHRR's Riley – outside great; inside way too much for BHRR's Atlas; BHRR's Hailey and my Sir Maestro are others that he feels a bit defensive towards. He also does not quite comprehend my TAIN! LOL Poor TAIN! The male GD that other males find feminine and so 'not as it should be'. LOL

BUT, considering all that he has gone through, he has made excellent progress on this front. 🙂

Regarding people, WOW! HE cannot get enough of the loving once he knows you are a friend. He wants strangers to love and pet him; but he still fears rejection and will stand a bit by himself with a hopeful wag and look in his eyes AND as soon as he knows that folks want to wuv on him; he gives it back tenfold!! FOR all that was done wrong to him; his heart and desire to want to trust and love and hope and wish is HUGE!

His eyes are no longer 'dead' but more 'wary' and 'guarded' and I can live with that…..for now. Time…time…time…and it is all his, at his pace with gentle encouragement with a firm standing behind him to assure him that he is not alone.

This boy just continues to make my heart thump and patter and pitter…..he is just divine! 🙂 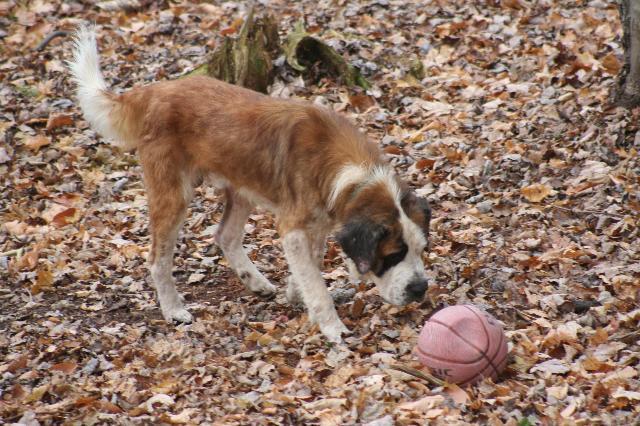 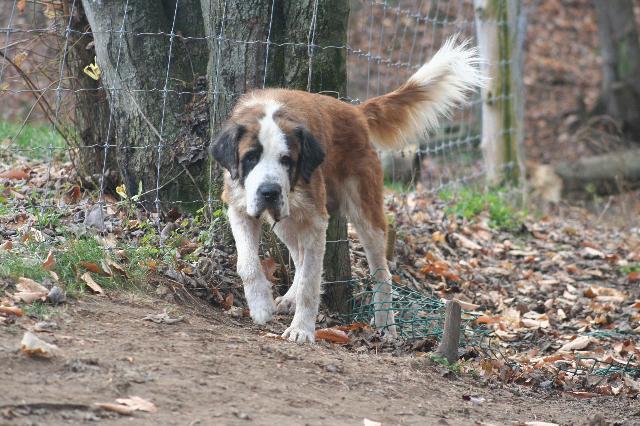 BHRR's Atlas – Saint – November 2011
HE is now looking at the basketball. Another dog brought it back out and LOOK! He is actually not slinking away from it!! He is showing interest…that is a great sign of living! AND see his tail??? It is more up!