Here is what BHRR's Broker's Temp Foster home had to say about him as we waited to transport him to BHRR:

Broker had a good night.  He got restless around 3AM, so we went outside for a bit, and then he finally ate.  He settled fairly well after that until X got us all up for his breakfast a couple of hours later.

He and X did play together this morning for a bit as well.  He and Y are now close.  They both seem to like the game they are playing, where she gets to correct him over and over for humping or trying too.  They will do this for a bit then both go lie down together.

Broker ate some lunch – he much preferred Y's food and she his so it all worked out 🙂 He is a huge drinker as well.  He was getting wet and dry mixed, but I don’t think he likes the wet/canned food much at all.

He is asking for attention form both 'of us' at every opportunity now too.

He knows some basic commands and is respectful of 'us'.

The moment he walked into our own home; he had marked three times. He made some attempts to hump. Since he has been neutered, he has not tried to hump one dog yet he continues to have some marking moments; yesterday none; today; two. We will continue to nip that in the bud. Until he stops marking and is solid in his obedience, he shall not go up for adoption.

He is fully crate trained now and his best bud remains Bleach!

He bonds fast to humans this boy!

Added two photos from his post-op recovery of his neuter and putting one below. LOVE the tongue! Ignore the one shaved leg, the vein was not easy to hit on this boy, so we had to use the other front leg. 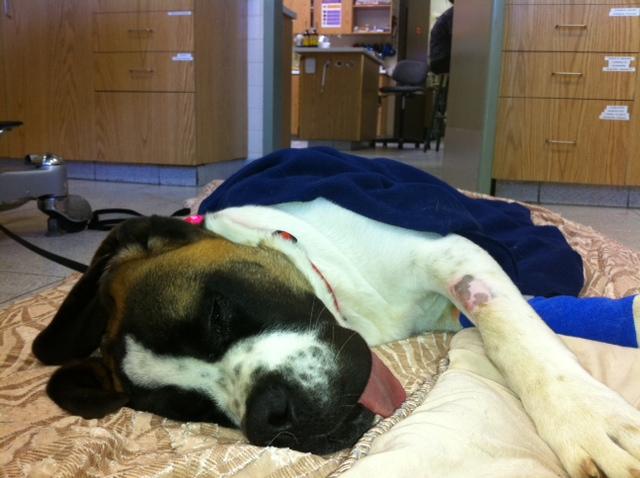