BHRR’s Dickens was scheduled to have his Vet Visit on December 28th yet due to another client at the Hospital needing to be seen, we rescheduled to Saturday December 30th.

He is just over 110 pounds now! Having put on almost 12 pounds since his arrival on December 7th. He is looking good! Some more pounds and more muscle mass plus tone and he is going to look even more handsome! He still has quite a bit of dander yet his coat is finally becoming more sleek and shiny. Excellent food, proper exercise, grooming and love is going to make his coat be very glossy.

He was a good boy at the Vets. Did well for everything other than ear checking and the taking of his temperature in his ears. Having had ear infections when he was dumped at the pound, and not having had a good history of proper handling, he is understandably stressed and also due to lack of manners, he liked to try and ‘throw’ his weight around.

His leash manners are also still a bit of a bull in a china shop yet improving daily! Managed to get a weight without any issues though. WTG BHRR’s Dickens…baby steps.

He was fantastic for his bloodwork and vaccines!

We are back in a month for boosters and a re-weigh, recheck and with even more handling and love and patience and time and consistency, will be even better.

I was so proud of him for he trusted Sean & I and while a bit nervous here and there, overall was quite solid. For a dog that was dumped at the pound said to be ‘aggressive’, not one aggressive bone to be found in his body to date. Such an overused and wrongly used term for so many dogs. He is what I call ‘mirror reactive’ and as we are calm, positively confident and being open with our expectations plus communications, he is not confused and is equally calm and settled and a happy, goofy, affectionate boy he is demonstrating to be.

He has had zero issues with any of the dogs here other than being a bit ‘woofy’ at BHRR’s Ryder and vice versus yet with both being around the same age….they are both ‘jockeying’ for a spot higher than each other in the hierarchy. Nothing serious yet being monitored closely.

BHRR’s Dickens best friend is BHRR’s Mama GD Gem though. She likes to push/boss him around yet god forbid he goes too far away from her and then she is right at him giving him a piece of her mind for leaving her….and he is quite happy to have her devoted attention…she is such a tiny explosive kanga-dane now to all in her small set up for success circle. The public arena’s terrify her so much still yet one small step at a time….

This picture is of BHRR’s Dickens from our annual traditional Christmas Eve Photo shoot on December 24th, 2017. He did so well! 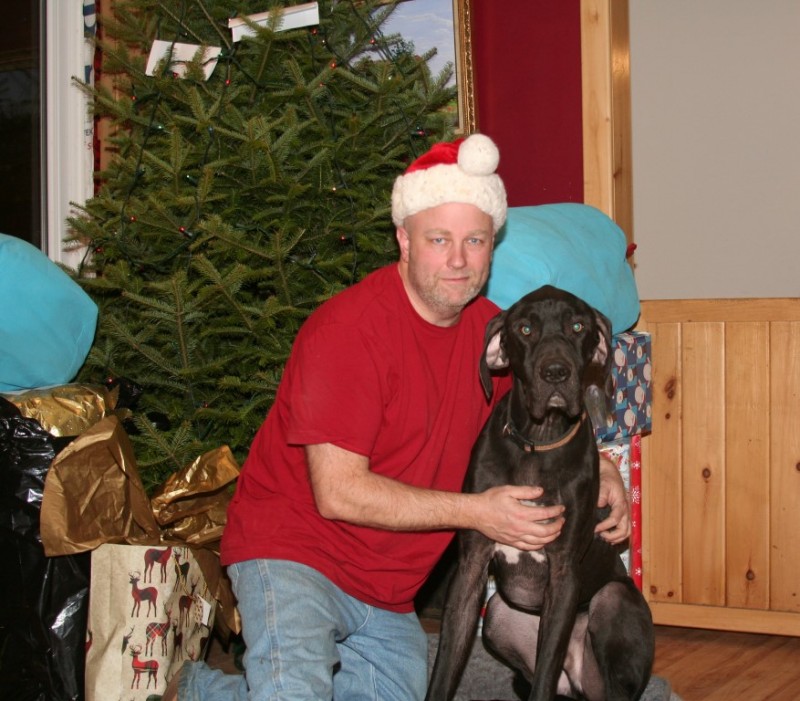