He was finally ready emotionally and physically to go to the Vet.

AND he rocked it! This once severe fear barrier aggressive boy was just solid.

Zero issues getting into the car, travelled great – was fairly relaxed and quite calm, looking curiously at the world around him. Leash manners were almost impeccable too.

He weighed 46.1 kgs (101.42 pounds) tonight. That means since his arrival to BHRR on April 17th, he has now put on 45.42 pounds and while still skinny, he is no longer emaciated. WTG! Well done BHRR’s Gravel! He has been developing much needed muscle tone and mass and he will need another good 12-15 pounds of weight before being considered at an ideal weight. So, for him, weighing around 115 pounds would be great. He is a smaller male Great Dane yet big in heart this sweet boy is.

He was a bit nervous when we first arrived yet such a solid boy overall. We had blood drawn for Heartworm plus Tickborne Borne disease testing and he stood on the scale like a champ.

He was calm and tail wagged stronger and more confidently the longer we were there. He laid down in the reception area and looked with wonderful interest at the other dogs that were also waiting for their own apts. He had zero worries with dogs or people and while he was not comfortable enough to take treats from anyone at the Hospital tonight, he at least smelled them.

His Vet had so many wonderful comments re: his coat and how shiny plus healthy it looked.

? No longer filled with tons of dander, old hair, dust and dirt.

His Vet agrees with me after doing their exam that he is most likely younger than 7. Perhaps 5 max. His eyes in particular did not indicate to be the eyes of a 7 year old dog.

His heart plus lungs were given a thumbs up and he was deemed healthy to begin his vaccine protocol.

We had de-wormed him upon arrival to our Rescue and he was placed on Heartworm/flea plus tick preventative at that time.

He was so quiet and accepting of the examination and I am deeply proud of him and the progress he has made since he arrived.

Mel & Danya, remember his transport from the pound? How you had to go down to the pound to try and get him out of the run Danya and attempting to get him into the car was a momentous feat. Look at him now?!

He really is a sweetie and when he buries his head gently into my lap or lays his head quietly upon my knee, my heart melts…..into total mush.

He is getting better and better at holding himself up with head held high with beautiful confidence and he is truly one uber handsome boy! When he lifts his head up and stands with belief in himself and trust in those around him, one really can see just how magnificent he is. His eyes shine with so much wisdom and heart. There is so much depth to this boys soul and every day feels like he trusts a bit more and is allowing us into his world. 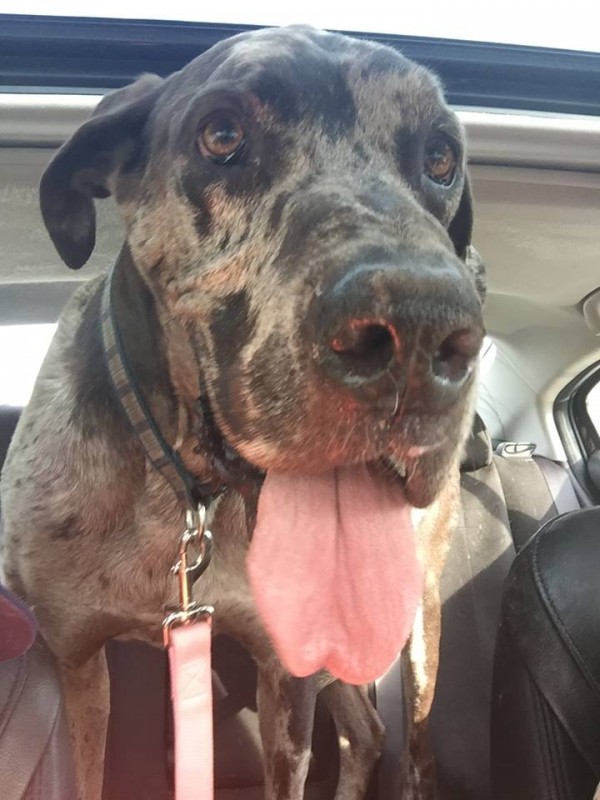