We have always said that if a right matched forever loving home came along and all fell into place, that we would adopt out one of our Haven Dogs. We have never said it would never be or ever happen and here we are!

We have had dogs move to our Haven Program and then moved to our Adoptable Program for they wonderfully defied so many odds yet this is a first to have an actual Haven Dog adopted and we could not be more thrilled, touched and excited….for home and BHRR’s Ani!

This home first heard about BHRR in 2010, they then first adopted from us in 2012 and since that time, have been truly caring to the BHRR animals.

They became in my opinion, the beautiful Fairy GodParents to BHRR’s Ani. They have provided for her in love, donations and being her special SS more than one year since 2012.

I truly do believe that some things are meant to be and I feel that I have been this gorgeous BBBBB’s Guardian Mama over the years and now she is right where she is meant be…..into the arms of this home!

From Fairy Godparents to her Adoring Mom & Dad!

They are prepared to take on and continue as needed her mouth surgeries – BHRR’s Ani has had three now since she was first diagnosed with fibromatous epulides of the periodontal ligament in April 2015.

I know they will be committed and dedicated to her proper wellbeing as they were with their previous BHRR adoptive GD(sadly passed away in March 2017) for they have stood by BHRR’s Ani & BHRR since fall of 2012 in so many ways!

As Approved Volunteers, they took BHRR’s Ani for an extended play date on Saturday April 8th and she stayed with them until her adoption was finalised tonight!

I am touched from my nose to my toes and to my soul to make this post about BHRR’s Happy Ani’s Adoption!

Congratulations to her parents and to her and yes, I do have tears yet they are mostly of the great kind….I shall miss her….very much, how could I not?! Yet, I know I shall see her again and I am in complete peace in knowing that this is her right matched forever home with two adoring humans and a handsome cat named Rusty to call ‘brother’!

Her adoption fee will go towards helping another incredible BHRR dog, BHRR’s Sambuca. 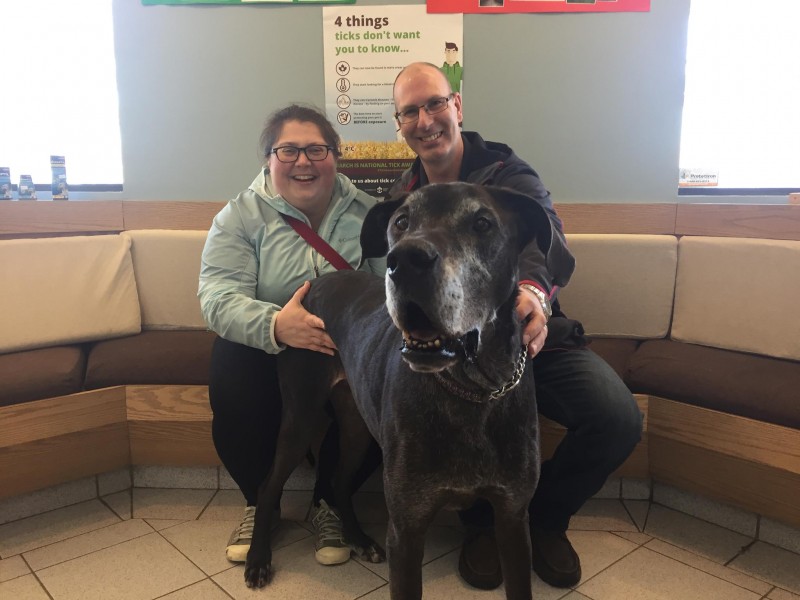