~ 6 month old Merlequin Great Dane Puppy with severe skins issues – Skinny, Demodectic Mange and Skin Infections.
He was an investigation case and, then was 'liberated'. A severe neglect and cruelty case.
It breaks my heart to see him so scared to go outside as he worries if he is going to be allowed to come back in. Door-ways and doors make him so stressed. When he first arrived, you had to go out with him for he would not go to the bathroom alone.
He had a skin scraping at the shelter and, we did another one upon arrival to BHRR – February 19th and, he is extremely positive. frown emoticon
At his Vet Visit On February 19th:
Temperature was normal, lungs normal, heart normal. Weight 31.2 KGs(68.64 pounds)
Took 2 more weeks of Cephalexin for his skin infections(total of 19 days in meds as the Shelter kindly provided 5 days).
Special ordered more 10 mg/ml Ivermectin to carry on his medications – We will re-visit around March 5th
**The Shelter has also had him on medications since February 5th, 2015**
He will be on medications for at least 12 weeks.
He will be de-wormed on Panacur for his paperwork mentioned parasites(the shelter kindly began his de-worming protocol).
He is a very small, neglected Great Dane boy, still skinny
Very affetionate, wants to please, already knows sit
When his skin is better, we will do bloodwork(to learn more about if there is any underlying auto-immune disorder and not just neglect/cruelty for his conditions) and nails. He is like a RAW wound right now. frown emoticon Bleeds easily….
He is a Merlequin and, they 'can be' prone to skin issues and, if not properly cared for, develop skin issues.
No picture will really show how bad his skin is, he is bald on at least 50%-60% off his body, small patches of hair elsewhere. Feet and ears very swollen along with his muzzle. It is so hot to the touch.
I took a couple of video's also….
He will go on a proper diet of FROMM Fish as, he could well have food allergies also.
He is lacking in muscle and, has bleeding areas's plus scabs all over his body. He is so itchy.
Yet, he remains so happy and, I do not find him a bull in a china shop at all.
He is also terrifed about being left outside. He is so reluctant to go outside.
I will put him in a dog coat and, when it is warmer, give him a nice soothing medicated plus oatmeal shampoo.
Even his wee butt is raw….
When he is healthy, he will receive the proper vaccines – we follow Dr. Jean Dodds Protocols and, be neutered. 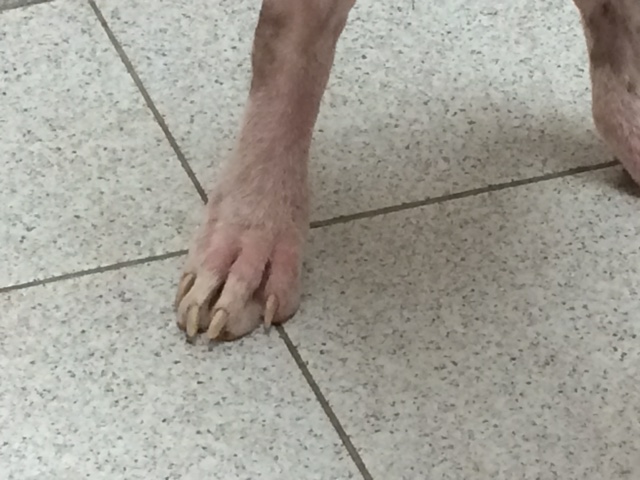 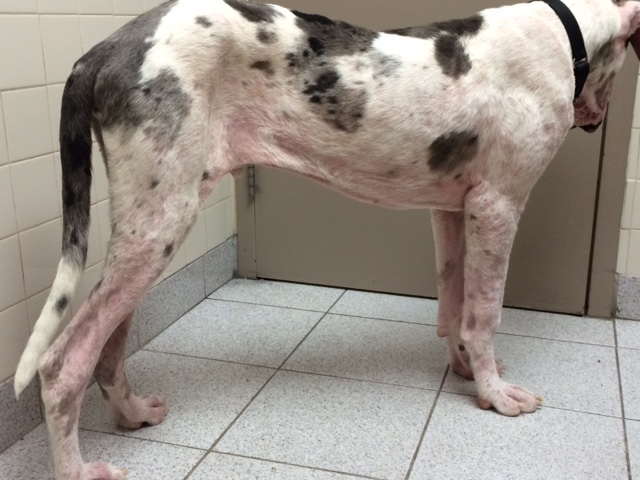 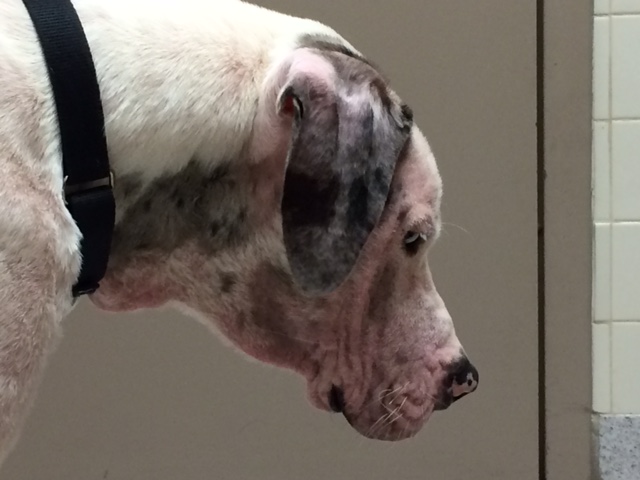