BHRR's Mavie
December 16th, 2014
Post-op…waiting to breathe on his own to then be extubated.
His weight has now dropped to 108.24 pounds.
Another culture is being done for the first one showed that the micro-organism of Beta Hemolytic Streptococci was sensitive to Clavamox.
Another culture is being done for the abscess had returned plus his infection worsened(DP removed dead tissue) despite being on Clavamox 375 mg BID and, on it since November 26th, 2014
Dr. Philibert also had to chisel the bone away from part of the plate as it had healed around the plate.
He is now going to be on Tramadol 100 mg TID, Baytril 300 mg BID and, also I have Buprenorphine 1 mg/ml (0.49 ml) per syringe TID for three days as extra comfort for him.
The plate/screws were put into the autoclave as no one knows what micro-organism may be on it and, I also have the plate/screws now!
He is resting well…..
I will be taking him home later tonight and will have him back in for a recheck in 5 days and, to take off the bandage – we could leave the bandage on until the staples come out yet, I want to be proactive and, make sure that his incision etc. can be checked before 10-14 days is up.
ANY considerations for donations – his bills today were $1,406.69 can be made direct to Kanata Animal Hospital (613) 836-2848 and, they will take CC over the phone or, in person as well as cash/debit in person. 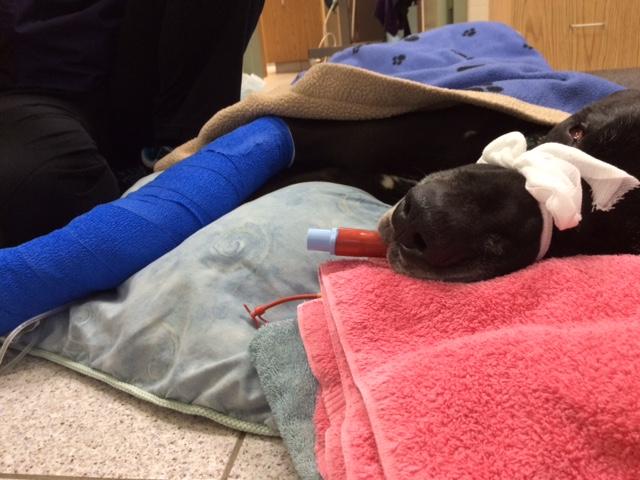