BHRR's Salem did SO well at the BHRR "EXPERIENCE' Mini Open House held on Sunday! We let her out when there were about 15-20 people left and, she just floated around, without any major issues at all….It always helps, when people are mindful plus respectful of all the information provided to them in their participation packages.

We ONLY had one home that was not respectful of what was carefully imparted their way both via the attendee package and, during their time at our home and, no further dogs were let out until they left and, even though they asked about the 'Mastiff Dog'(their words), I said, she would be out later. I was not going to see any more of my dogs set-up for failure than what they had already done in damage. Many BHRR Approved Volunteers, and supporters were upset and even, angry at the manner in which they conducted themselves, and, I myself was witness to them showing complete disregard when it came to BHRR's Canvas. A BHRR Volunteer grabbed me and, I had to step in.
They had been clearly told to leave him alone and yet, they practically cornered him and, stressed him out so bad, that he became even scared of those he trusted. We open up our home for others to come and visit and, give up precious coveted family time to do so, as it is so important to have people see what we do firsthand. In no way, was I going to see any more of my dogs, be in their presence and, we began to put dogs into their safe places so, less were out until they left….they will not be welcomed back…..As I tell many people, it can take moments to ruin months of rehab work and, thank you to all those that remained to help give the dogs that they set-up for failure extra positive experiences. If we have not had such a strong just shy of 15 year history hosting these events, we would have not wanted to host any further 'EXPERIENCE' Mini Open House events, because of people like that.

Back to BHRR's Salem though! Sean and I were watching closely to see if she would be skittish to men.,…or even, women yet, she was quite solid. She has been fully integrated with all the dogs of BHRR for some time and, was very much ready for this next big step….and, she handled it like a pro! 🙂

She has a special SS and, when her SS is ready, we are going to go over to their home for a visit and, they can give her their SS in person…this will be good for her to get out and about and, on to the next steps of her rehab journey.

Below is a photo taken of her with a wonderful soul, and the photo is courtesy of them also. Thanks Dee!

A file is set up at Kanata Animal Hospital (613) 836-2848 and they will take Visa, M/C and AMEX over the phone under the account of ‘Birch Haven Rescue’ for ‘Salem’. They will take Debit or Cash in person at 440 Hazeldean Road in Kanata, Ontario 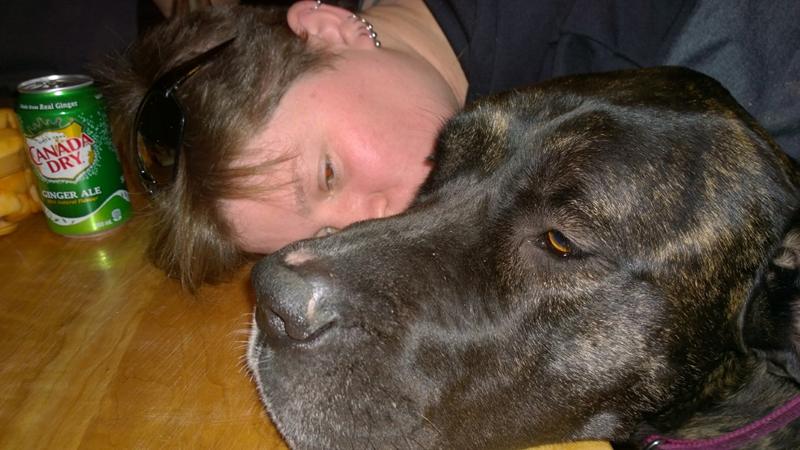