On November 14th, I was contacted and advised re: 2 more Great Danes in need. As we were no longer going to be receiving the one 'skinny' black with white female unspayed GD, that had been an o/s as that place's policy is that despite asking for rescue assistance and, obtaining rescue commitment, they will still adopt out a dog if someone comes in. Unfortunately, someone came in and, got her. They have a male GD at home already from what I was told. All we can do is hope that she is right done by.

So, in receiving the information about two more Great Danes in need, we asked for more information. With two pending adoptions and, with one of my own dying and, BHRR Haven Dog BHRR's Salma(HQD) not faring well, AND, that the one GD that we had committed to was no longer coming to us, we offered to take the the one most in need.

So, the one that we are taking(I have been told the other one is more of a GDx – and, she appears quite obese and, could well have a thyroid problem if so….I was not worried about her…she would be a much easier Dog to assist by another), is the emaciated female GD that was dumped on the streets by her O.(known by others) She then lived off the streets for many weeks eating scraps until she was picked up as a stray. 🙁

Emaciation we are experts in dealing with…….

This photo is taken one week after she was picked up. I knew we were going to commit to her before, looking at any evaluation report or seeing a photo.

Yet, when I did receive the information, it has been a very long time since I giggled so much watching an evaluation! OMG! She is hilarious…all puppy…no more than 11 months of age TOPS….happy, playful and, I called her 'spastic'. NO manners, bouncing and jumping and zipping and zooming…no focus at all! LOVE it! Despite all the neglect and abuse and cruelty, she was so friendly, affectionate and, so happy!

We are going to call her BHRR's Kricket…..from the sounds she makes to a Fun Fact that many may not be aware of re: Crickets: In many parts of the world, crickets are thought to bring good luck AND, she is sure going to bring someone special some really great luck!!! 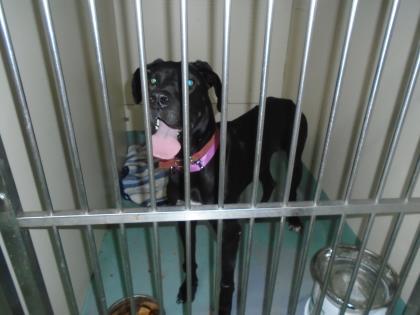