BHRR’s Apollo had a good night. Just a couple of restless times and around 6:00 – 6:30 AM; we had him up and out yet he could not yet figure out how to pee on that leg. Offered him a very small bit of food to get down his meds and he ate it with gusto. I gave him his 2nd injection of hydromorphone and he is resting comfortably again with some nice snoring! His incision site is looking awesome and we have counted 27 staples.

Updated: July 3rd – 7:30 PM: YAY! BHRR’s Apollo finally figured it out and had one of the biggest pees I have seen in awhile. I always wish I could ‘do’ it for them yet they all have to figure it out and they always do and I bet he feels sooooooooo much better now. We just kept presenting opportunities for him to pee and he put it all together! He has not yet pooped but I will be taking him out again in a couple of hours. He ate a nice afternoon small meal and the bruising is beginning to set in. He is doing so well and gosh, what a great temperament this boy has! He was not so fond of me cleaning that one ear of his last night though! 😛 I have to still do the other one and all in good time. He had a nice long drink of water and is now back in the triage area resting. I had him in his crate for a bit this afternoon for some ‘quiet’ Apollo time as in the triage area BHRR’s Ava Marie does not want to leave his side! She is such an awesome nursemaid yet we did not wish to see her accidentally step on Apollo; so while neither Sean nor myself could be in the triage area with the tending to of other BHRR house chores; Apollo happily layed in his crate for a snooze. Picture below of them both and BHRR’s Ava Marie also likes to keep re-arranging the blankets around the monkey! I meant to also post that Apollo’s weight was around 150 pounds at the time of his surgery and he still has another 10 pounds or so that I would like to see on him at this time. 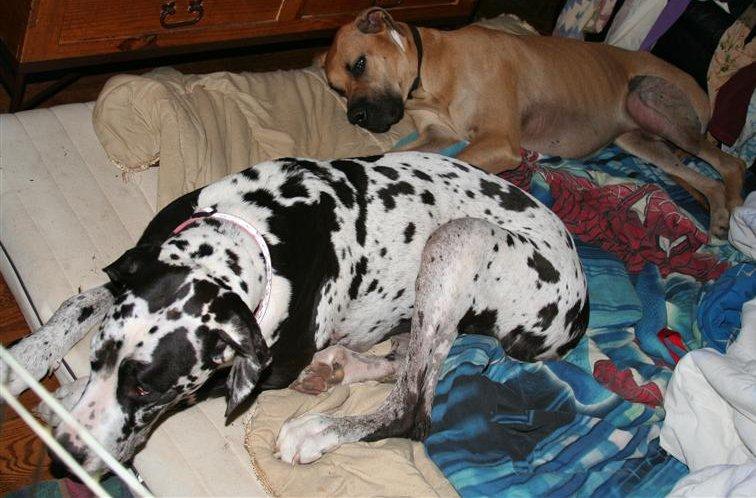