BHRR's Leroy is NOW at BHRR! Thank you to the ever wonderful Judy and Gracie for the assistance! Part of their reward….being chauffeured by  me in our truck with off roading up and down our spring thaw lane way! LOL

While I was at the end of our laneway waiting for them, and, I saw him come around some of the other parked cars for our BHRR "EXPERIENCE" Mini Open House, I was taken aback by his body condition. This boy had been with this particular home since September as a foster dog for the shelter and then adopted in November of 2013 and prior to September (confirmed he was a stray via the shelter paperwork), had been adopted out several times also by them. It never crossed my mind to find him emaciated. 🙁 The Vets gave him a BCS of barely 2 out of 5.

There was more than one gasp from an attendee at our BHRR 'EXPERIENCE' Mini Open House upon his arrival to BHRR and, witnessing his poor body condition.

I would peg him closer to age 4 yet, when I can get better into his mouth, I will see…the masking on his face means nothing to me in respect to aging him as if it is a masking gene, he could have had that by the time he was 1 year of age, or even younger. He has been quiet, is not drinking well but is eating really well. I am feeding him up to 8 smaller meals a day right now.

He has been integrated with a few of the gang here. The BHRR purse puppies, BHRR's Gretta, Mr. Bubbles, BHRR's Bloom, HQD and BHRR's Rain to date. He has shown no signs of aggression or fear. He does 'avoidance'. He did not like the exuberance of my one own GD, Sir Maestro. He was fine with seeing my other two blue boyz GD's of TAIN and Big Blue Bronson.

Below is a photo of BHRR's Leroy(keeping his name for he has had so many names prior to coming here, to give him some consistency) on his transport to BHRR and two of his ribs as of April 6th, 2014(today).

He has started being de-wormed, has been put on heartworm/flea prevention and we will do bw, including fecal and heartworm testing.

He showed mild interest in Mason's 2 gpiggers(very sadly, his third gpigger Burn passed away one day shy of his 3rd birthday on April 1st, 2014 – stroke and abdomen mass), yet, no prey drive.

The days are early yet though, and, lots of time to get to know him and, see him get into his own and out of the honeymoon period. 😀

AND, in those photo's posted(March 31st blog post) – they were from late summer/early fall of 2013 – HE also had a tail plus had a fairly good body condition. I am not sure why his tail in the end had to be docked yet, he is sporting a very small tail now.

A file is set up at Kanata Animal Hospital (613) 836-2848 and they will take Visa, M/C and AMEX over the phone under the account of ‘Birch Haven Rescue’ for ‘Leroy’. They will take Debit or Cash in person at 440 Hazeldean Road in Kanata, Ontario 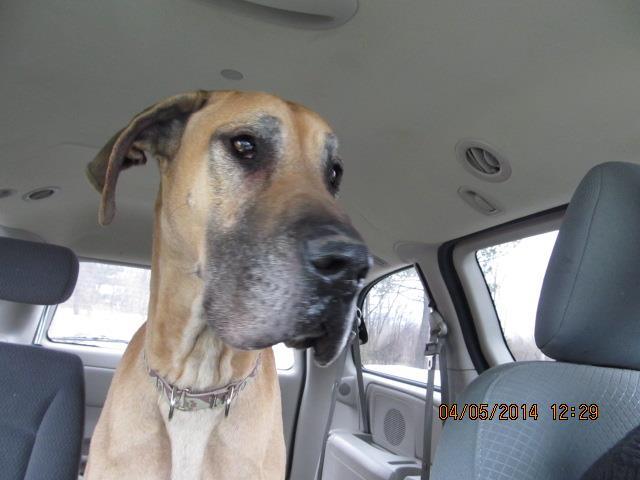 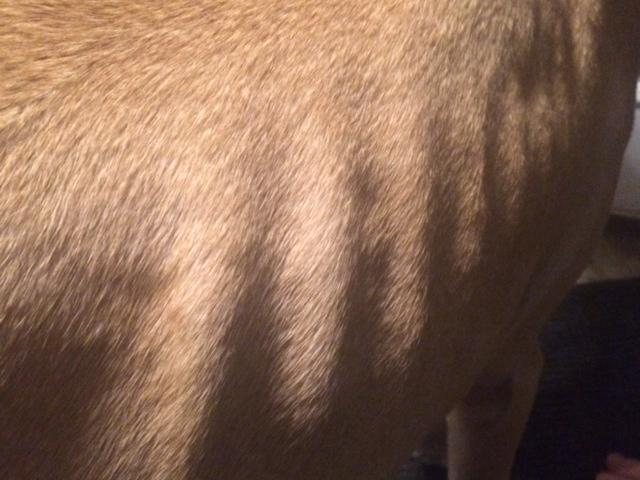 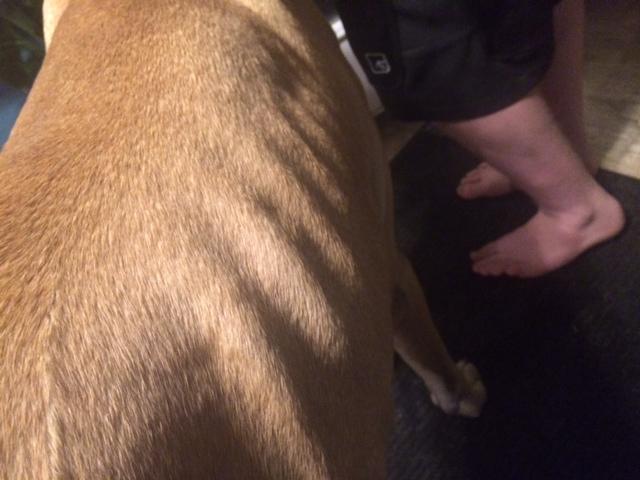 BHRR's Leroy's ribs – Body April 6th, 2014 –  Mason is holding his collar/head so I can try and snag some photo's
**these photo's are taken after him having 8 meals over the last 24 hours also**