Per my blog post on December 4th, 2013 that indicated BHRR’s Treasure was now available for adoption, I made a statement about his hips. Well, the weather has proven to be quite bad/hard for him and to continue to be proactive with our mandate on every animal not lacking in anything, I am going to get x-rays done on those hips. His is having increased discomfort and mobility issues. He has begun to take Deramaxx 100 mg SID and, that is helping and we can ‘add-on’ Gabapentin if need be yet, I do not want to be ‘masking’ any underlying issues and not be aware of what is going on…..

Could his hips have been one of the reasons why he was dumped??? Was his past O. aware of something and, never disclosed it. He has always been a bit stiff and he has very little rear angles and with those straight legs/knees, he has never moved to a high level of quality, BHRR’s Jetta is similar(not as bad!) In his exams, his Vets were never overly concerned that, there could be a huge problem going on yet, I am not liking what I am seeing this past week. So, off for x-rays(we sure are doing our share of these of late), to see what is going on in there…………just, what has been manifesting itself… 🙁

I have BHRR’s Torque coming to work with me later today and BHRR’s Angel Noelle on Saturday, yet, I am going to try and get him squeezed in. If not, maybe, bump BHRR’s Torque or scheduled BHRR’s Treasure early next week. I am really not feeling good in my gut over those hips of his….and, what, may be going on with those knees now that we are in the depth of winter and it, certainly has been a cold hard one. I need to know….

In the meantime, here is BHRR’s Treasure’s December 24th, Christmas Eve photo as part of our tradition! 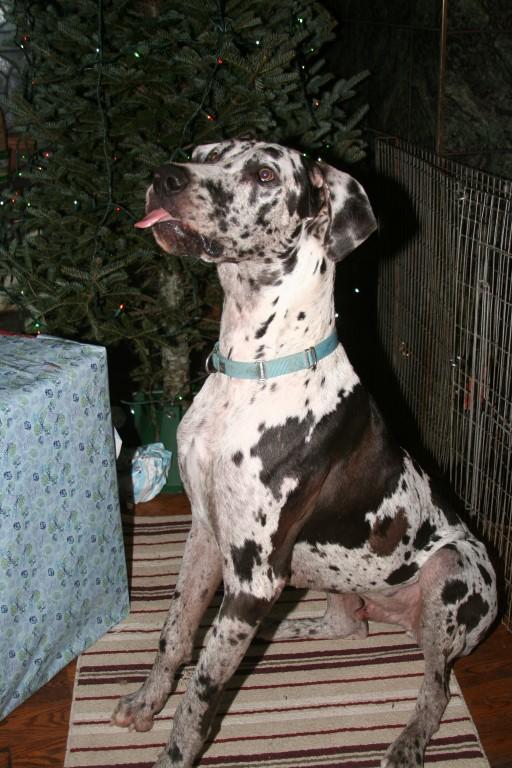