On July 9th, @ 4:34 PM I received the following message on fb by an approved BHRR Volunteer:

I know BHRR is swamped with requests these days but still wanted to check if you or another rescue might be able to take this girl. She's a free 3 month old Doberman that's visually impaired. I sent an email to the person who giving her away to find out if she was still available. Let me know!"

I just called the owner…she has a couple of people coming by tonight to visit but I explained to her BHRR would be the perfect option if she wants to make sure this puppy will have a good future.

I told her that you had loads of experience working with blind dogs (she's pretty sure the dog is blind, maybe she sees light and shadows,…she's taking her to the vet tmo to find out what the deal is)

She got the puppy from one of her friends that had a litter…she fell in love with this puppy because it was blind but the boyfriend is not happy with the situation and wants the puppy to go."

"The puppy is apparently super friendly and sweet…I really hope it works out!

She seemed interested…she loves this dog and wants what's best for it, she's just not able to give it what it needs…"

"Gwen, great news, she decided to surrender the dog to Birch Haven and would like to arrange for pickup as soon as possible."

We made transport arrangements to bring this special needs Doberman puppy to BHRR on Saturday July 13th. One photo of her below. 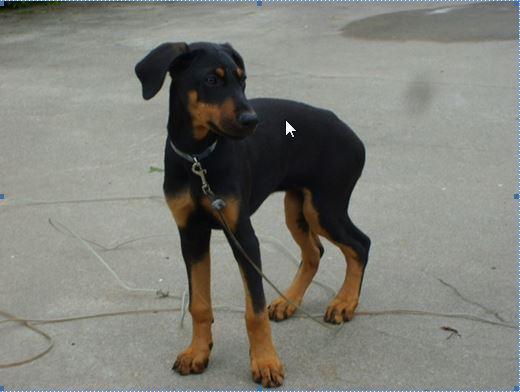 Photo courtesy of her previous home.